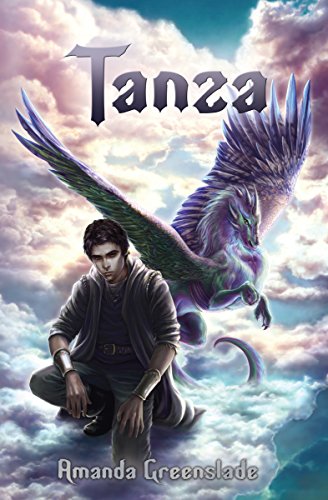 Sarlice and I came to Tanza to escape from the Zeikas, and we were not prepared for a country on the brink of war. Where should our loyalties lie—to our home towns, to Tanza or to each other?

The Zeikas have their fire magic, dragons and demons, but they lack the Kriite ability to communicate across vast distances using the waves. I know one thing—the skyearls will not give up Tanza without a fight.

Soon I will have a skyearl of my own, and the miracle of flight along with it. I was slow to come into my powers in Jaria, but I was wrong to think Krii had no purpose for my life. They have a new name for me here in Tanza: Astor Talon.

‘Tanza’ is the second in “The Astor Chronicles”, a series of epic fantasy adventure novels for a new adult audience.

I enjoyed reading this book. It is a fantasy with a lot of action put in it and  is an easy read. This is a book that cannot be read alone. You need to read Talon first.

I had trouble understanding what was going on in the first couple of chapters. It seemed like Tanza immediately picks up where Talon left off. I was left to puzzle over what wavelengths were. I was confused and I do not like reading a book where I am confused.

I was thrilled that there is a glossary at the very end of the book. I was able to reread those chapters with a better understanding of what is going on. Also, kudos to her, including the glossary. It also had how to pronounce some of the names. I am a weirdo who likes to know how the names are said. I know I’m not the only one.

This book is filled with action, which started after Talon bonded with his skyearl. The Zeikas is an extremist religious group who are determined to kill anyone who doesn’t agree with them. Tanza is next on their list. Tanza is protected by a barrier. It does take the Zeikas a while before they succeed in breaching the barrier.

The battles in this book were impressive, on both ends. From the demons/conjurers/dragons on the Zeika side to the Anzaii/Rada-kin/skyearls on the Tanza side, the battles were epic. I couldn’t get enough of them.

The religious undertones of the book were right. Krii is, and I am going to assume this, like Jesus and the Zeikas are like Satan. The battles are a battle between good and evil, but the lines are blurred behind the Tanza lines too. There are extremists on both ends, and the extremists can cause a lot of harm (and they did in this book).

The ending of the book was a bit anticlimactic., I understood why the author wrote it this way. In no way did she end the battle between Tanza and the Zeikas with Tanza winning. They won one battle and drove the Zeikas away, for now. Who’s to say in the next book that the Zeikas will come back and take over the land?

I wasn’t expecting certain things to happen at the ending and was thrown for a loop when it did. But, thinking about it, there were huge red flags thrown up in the last chapters of the book. I shouldn’t have been that surprised.

How many stars will I give Tanza? 4

Why? A great fantasy book with well-written characters. If you didn’t read book 1, like me, I suggest you go and read it. If you don’t, then make use of the glossary at the end of the book.

Will I reread? Yes but after I read book 1

Will I recommend to family and friends? Yes but will also suggest reading book 1 first

Why: No sex (but there is mention of rape and the threat of rape in the book) and lots of violence.

One thought on “Tanza (The Astor Chronicles: Book 2) by Amanda Greenslade”