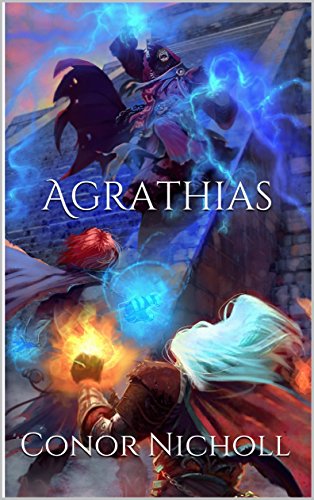 900 years ago, Dogane fell at the hands of Ubinion and Ramas. That day, the people rejoiced to the heavens, which had finally removed its dark veil and given them the warmth they deserved for so long. Since then, nearly everyone had forgotten the power that almost tore Agrathias apart.

But Ubinion and Ramas had always warned of the corruption they were never able to completely rid the world of. A corruption that now allows one sorcerer the chance to rule Agrathias…forever…

This book was fantastic, and I loved reading it.

Agrathias starts with a mystery man sitting in a tree, surrounded by monsters called Arcams. He is full of grief and guilt over leading them to his village and the death of his sister. The chapter ends with a battle between him and the Arcams. This unknown man is a sorcerer and he controls ice. He did take out a ton of Arcams before being captured.

The next chapter, Arone is approached by a strange man and is demanded to give back what is his. Arone does what any sane person would do being confronted by a weirdo, he turns around and leaves. But he gets attacked by a strange guy and injures him with fire, which startles Arone. At this point, Arone’s brother shows up and they head to the village to let the mayor know.

The mayor gives Arone an egg-like object and tells him to head to the capital to talk to the king. Before that could happen the Arcams attack the village. While Arone is helping defend, he is told to find his parents by their friend. He witnesses the destruction of his village and the death of his brother while escaping.

Arone is grief-stricken. He makes it to the city and sees the king, who has the same reaction that the mayor had. The king put Arone up at a tavern and has him meet his sorcerer, Tyris.

Arone discusses magic with Tyris. He can’t understand where his fire magic comes from. That night, he goes back to the tavern and realizes that his egg-like object has hatched, and it is a baby griffon. He tells Tyris, who advises him on how to handle a griffon.

After that, the book gets epic. Arone, Aine, Akadi, Abnoba, and a motley crew that they pick up in their adventures. I loved Lupercus and Gunnolf’s characters. Kathara, I didn’t care for her. She was too prickly for me to like. Urana’s and the Ragmar’s characters weren’t gotten into until almost the very end.

The adventures that crew went on were epic and very well written. I felt that I was in a quest with them all.

I did feel bad for Dogane. While he was evil, he didn’t start that way. He was made that way by being abused by a tutor that his father hired. He did try to tell his father, and his father looked the other way. It was heartbreaking reading that but it explained a lot.

The ending of the book was fantastic. All the storylines were ended. But there are still unanswered questions that will be explored in the next book. I would love to know, what happened to Arone’s parents? Are they still alive?

How many stars will I give Agrathias? 4

Why? A great, well-written fantasy novel. This book takes you away to a land where magic is the norm, griffins are real and friendships that are forged are forever.

Why? To be honest, I would have no problem with my 11-year-old daughter reading this book. It is very clean (no sex, no swearing) with minimal violence.

One thought on “Agrathias by Conor Nicholl”