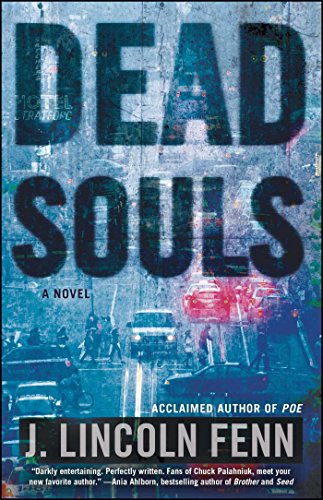 From the award-winning author of the acclaimed novel Poe comes an edgy and bone-chilling new novel.

When Fiona Dunn is approached in a bar by a man who claims he’s the devil, she figures it’s just some kind of postmodern-slash-ironic pickup line. But a few drinks in, he offers her a wish in exchange for her immortal soul, and in addition, Fiona must perform a special favor for him whenever the time comes. Fiona finds the entire matter so absurd that she agrees. Bad idea. Not only does Fiona soon discover that she really was talking to the devil incarnate, but she’s now been initiated into a bizarre support group of similar “dead souls”—those who have done the same thing as Fiona on a whim, and who must spend their waking hours in absolute terror of that favor eventually being called in…and what exactly is required from each of them in order to give the devil his due.

What would you do if the devil approached you, offered your heart’s desire and all you have to do is give him your soul and perform a special favor for him? Would you take him up on his offer or would you walk away?

That is what Fiona ran into in this book. After seeing her boyfriend of 3 years hugging another woman at the airport, she returns home to find that she has locked her keys in the apartment. Upset, she heads to the local bar, where she approached by a man who claims to be Scratch. He wanted to know if Fiona would give him her soul to get what Fiona wanted. All she had to do was perform a special favor. At this point, I would be calling over the bouncer to have him escorted off the property. But for some reason, Fiona didn’t, and she agreed.

Things start to get super creepy. Fiona starts going to a support group of people who have also made a deal with the devil. They ranged from a college student who wanted to levitate to a lesbian who wanted to be straight (yes, you read that right, even I did a WTF there) to a couple who desperately wanted children to a mysterious photographer. They meet once a month to see if they are all still there and to check their cards.

I am going to shut up at this point because the book got creepy and surreal. The favors got called in on everyone in the group.

The ending of the book was surprising. I expected some of it, but I didn’t expect the other thing what happened. Totally didn’t expect it and it kind of threw me off.

How many stars will I give Dead Souls? 5

One thought on “Dead Souls by J. Lincoln Fenn”