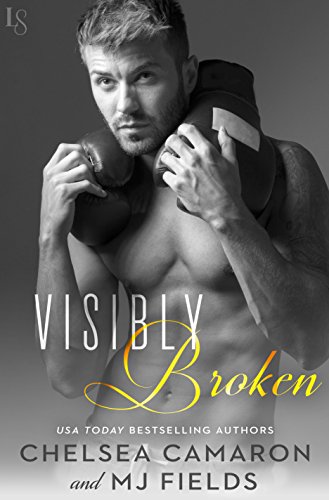 In a powerful, smoldering novel from the bestselling authors of the Caldwell Brothers series (“Bad boy heroes to die for!”—Tracy Wolff), two tortured souls team up to overcome the past, finding the courage to heal . . . and to love.

Jason “Cobra” Stanley was born to fight. With a father like his, he had to toughen up just to survive. Now Cobra tries to take out all of his frustration, all of his anger, and all of his pain in the MMA cage. But after he receives one too many hits to the head during a match, the cycle of violence comes to a screeching halt. Cobra wakes up in the hospital, under the care of a nurse whose blond hair shines like a halo—and whose pure heart touches him on the deepest level.

Lorraine Bosch is a fighter too. The lone survivor of a chilling family tragedy, she prides herself on remaining professional, despite the chaos of the ER. But Cobra is the ultimate distraction. Lorraine knows she should run away screaming from his rippling muscles and shattered psyche. And yet how can she deny this broken man a second chance—especially since she knows exactly what he’s been through? Lorraine’s used to playing guardian angel. Now it’s her turn to find heaven in Cobra’s arms.

Do not let first impressions ruin this book for you. The first couple of chapters of this book are tough to read. Jason and his girlfriend are abusive to each other. To stop from hitting her, he starts doing MMA style underground cage matches. During one of those matches, he gets hit on the head hard and gets dumped at the ER. That is where he meets Lorraine, a nurse who is damaged by her past.

Like I said above, you need to get past the first couple of chapters to feel the book. I couldn’t understand why the authors would start the book like that. But the more I learned about Jason and his childhood, the more I understood and it is heartbreaking.

It took a while for Jason to grow on me. It took a while to realize that through helping Lorraine, he was helping himself get over his past trauma. He found someone he could protect in Lorraine. Someone who accepted him and his past with no questions asked. Someone who stilled the rage and violence in him. Someone who made him think that he wasn’t the monster that he believed he was.

Lorraine was as damaged as Jason. It took me a while to realize how damaged she was because of the way the book described her. It was brilliant of the authors to do it the way they did. I thought that there were two people instead of one. The more  interactions she has with Dr. Bennett and his family, I came to understand why and it is sick.

The ending wasn’t what I thought it was. The twist fit in with the plot, and I was a little surprised by it. The epilogue was what got me. I was crying at the end.

How many stars will I give Visibly broken? 4/4.5 stars