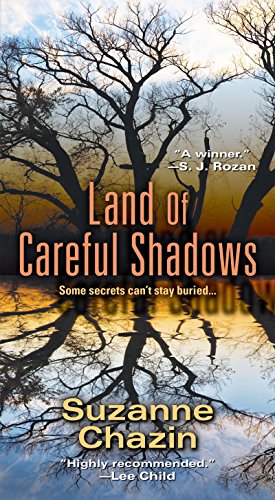 A Blossom of Bright Light – Book 2

No Witness But the Moon – Book 3 (Review here)

Where can you find this book: Amazon

A body is discovered in a reservoir north of New York City. The victim is young, female and Hispanic. In her purse, police find a photo of a baby. Where is the child? Is she alive? And what about the disturbing note found at the scene? “Go back to your country. You don’t belong here.”

Homicide detective Jimmy Vega knows how hard it can be to walk the razor-thin line of acceptance in a place like Lake Holly. Reluctantly turning to Adele Figueroa, a passionate defender of immigrants’ rights, Vega must confront a small town’s darkest secrets and deepest obsessions—before they savagely tear apart the world he’s sworn to defend.

Suzanne Chazin is fast becoming one of my favorite authors to read. I read No Witness But the Moon and loved it.

Jimmy Vega is introduced when a body is pulled from the reservoir. He is a county cop, but they sent him to Lake Holly to assist in the investigation because they believe that the woman pulled from the lake was murdered. He realizes that solving this murder is going to be almost impossible. The young woman was part of Lake Holly’s illegal immigrant community and getting them to talk will be next to impossible without help. So he goes to his best bet, Adele Figueroa, a lawyer who is very close to the immigrant community.

Rodrigo is introduced also. He is an illegal immigrant trying to find work so he can send money to his wife in Guatemala. But that is not all. He has a tie to the dead woman.

Jimmy Vega is a complex character, and I loved it. One one hand, he was a great cop with a kind heart, but on the other hand, he had a shitty personal life. His daughter is falling apart, mentally, after almost being killed by a train a few months ago. His mother was murdered in a messed up robbery a couple of years ago, and he still carries the grief around with him. On top of it all, he finds out that his high school girlfriend lives in Lake Holly and he still has feelings over that breakup.

Adele came off as a bitch in this book. I liked her in the other book a lot better. She was determined to block Jimmy at every turn because she was afraid that the killer was an illegal immigrant and he/she would be deported. I got where she was coming from, but I also understood where Jimmy was coming from. He had a case to solve and here is Adele, throwing roadblocks in his way, until she realized that she could be more of a help to Jimmy. Those couple of chapters drove me nuts.

This book was different. There were several different “mysteries” going on at the same time. There was the young woman who was murdered. Then there was the rash of hate crimes that killed an immigrant. Plus the mystery of what happened to the woman’s baby and what happened that night of Jimmy’s daughter’s accident.

I liked is that the author wrapped the different mysteries at different times with different outcomes. It kept my attention focused on the book.

The ending was great, and I felt for Jimmy in the last chapter. Being a parent is hard and making sure that your kids do the right thing is even harder.