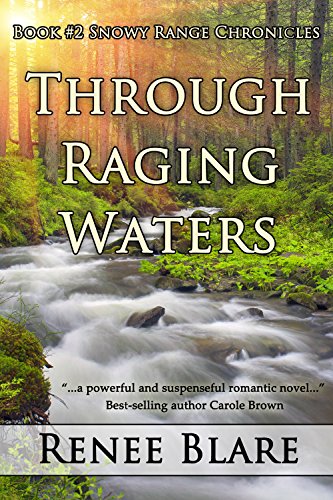 Where can you find this book? Amazon

If Mother Nature has her way, Timber Springs will never be the same…

A warm spring and early rainstorms melt the snowpack. Spring runoff compounded by the storm of the century sends Timber Springs into a tailspin.
Tossed into the role of rescuer, local pharmacist Paul Fitzgerald must face his past before the whole world falls apart. While he fights to contain the beast around him, he finds his steadfast control slipping through his fingers. And life…everyone’s life…hangs by a thread once again.
She isn’t a hero. Melissa Hampton has her own demons to battle. After she learns of her mysterious beginnings amidst her mother’s keepsakes, she faces more than just the river rushing outside her door. Now, she must discern friend from foe…but as waters rise and tension climbs within Timber Springs, she needs to rise to the challenge or lose the only man she’s ever loved.

Can two people find each other through raging waters?

I was pleasantly surprised by this book, considering that it started slow. I had trouble getting through the first couple of chapters before it picked up steam.

Through Raging Waters is a Christian romance and I was expecting it to be incredibly preachy. It wasn’t. Melissa and Paul’s relationship interweaved skillfully with each other and other people. Unlike some other Christian novels I have read, their relationship and religion wasn’t preachy.

Through Raging Waters is not a standalone book. I wish that I had read To Soar on Eagle’s Wings (which is Rachel and Steve’s story) to understand some of the back stories in this book. It doesn’t take away from the book at all. It raised some questions on my end about what happened in the first book.

I did like Melissa. She was strong in faith and spirit. I couldn’t have gone on living in a town where my attacker resided and not known who he was. It would have driven me crazy. I felt awful during the scenes where she uncovered her deceased mother’s secrets and then met her father. Talk about hitting you in the feels.

Paul was an enigma to me. I couldn’t figure out what he did. I did figure out that the discussion about his job happened in book 1.  His faith was just as strong as Melissa’s. I believe that his prayers and Melissa’s determination to get to him are what saved him.

I liked that the romance between Paul and Melissa was almost not there. There were sparks at the beginning that got squashed by the flood, Paul’s father having a stroke and Paul leaving on the rescue mission. The whole time he was gone, they both thought of each other regularly and with love. It wasn’t until Ajax forced Melissa to come to terms with her feelings and she let Paul know how she felt that the book took on the romance angle.

The ending of the book was great. There was a big plot twist that I saw coming but didn’t expect and another one that took me by surprise. I liked that while everything was wrapped up for Melissa and Paul, the author left the book open for the other children.

How many stars will I give Through Raging Waters? 4/4.5

One thought on “Through Raging Waters (Snowy Range Chronicles: Book 1) by Renee Blare”