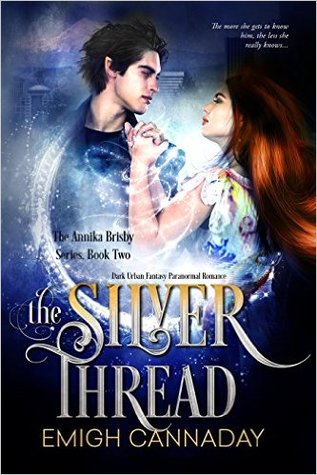 The Flame and The Arrow – Book 1 (review here)

Where can you find The Silver Thread? Amazon

“You know, my parents didn’t give me much advice about relationships, but my mother told me that we should never go to bed upset with one another.” Talvi reached an arm out to invite Annika to curl up against his chest next to his heart.
“Aww, that’s a sweet thing to say,” she said as she cozied up in the crook of his arm. “What did your dad tell you?”
“He said to make sure the sofa was comfortable, just in case.”

Talvi Marinossian has slain maenads and fought off vampire attacks, but nothing has prepared him for getting involved with one of these forbidden ‘Modern Girls’. When he finally tracks down Annika it’s obvious that she’s changed since her recent adventure in his homeland. It’s not just that her spirits have fallen; it’s also clear that she’s not ready to embrace the next chapter in her life. He tries to persuade her to open up to him, but she finds it difficult since he won’t even explain how he earns a living, why he has a secret cell phone, or the reason he keeps another woman’s handkerchief in his pocket. Instead of relying on Talvi to help her adjust, Annika delves into her music and her job, and it isn’t long before the new lovers find themselves completely out of sync with one another. Just when they start to find their rhythm, Talvi is called away on business and whisks Annika off to Paris for what is supposed to be a working vacation. But one bad decision leads to another, and the chaos that ensues may cost someone their life.

I can’t even begin to tell you guys how excited I was when Emigh approached me to review The Silver Thread. I was fangirl excited. I squeed like a young girl at a One Direction concert when I saw the email from her. I had reviewed The Flame and The Arrow and enjoyed reading it, so I had high expectations for this book.

The story begins with Talvi and Chivanni at Talvi’s family’s house. They are discussing trying to find Annika after she was pulled through the portal. Talvi is also mourning the loss of his sister, Yuri, well what he considers a loss. Yuri was turned into a vampire by Konstantin.

After about 3 months of searching, Talvi finds Annika in Portland. She was living with her brother Charlie and his best friend James. She had been depressed. The only thing she was doing was playing with her band, drinking and going to bed. That’s it. When Talvi shows up, it’s like a switch has been thrown. She was thrown out of her depression.

This is where the book turned good. Instead of having an adventure, the author chose to examine Talvi and Annika’s relationship. Sure, they were married but they were strangers. When they started living together, they found out that they were different. I hated that Annika came off as jealous in a few chapters.

Talvi was not good at communicating outside the bedroom. He never talked to Annika unless it was to be a smartass. I didn’t blame Annika when she starts questioning her relationship with Talvi.

I wished that Annika could figure out who she wanted. It was driving me nuts when she was seesawing back and forth between Talvi and Finn. Her time with Finn in Paris was, interesting. I am glad the author went the way that she did with the storyline though.

The sex was as good in the first book. Just as toe-curling and just as hot!!!

I will say that I was a little disappointed that Yuri only made one appearance. Also that she seemed to change from the first book. I got very sad about that.

The ending was great and I didn’t see the twist coming. It came out of left field and left it wide open for a 3rd book.

How many stars will I give The Silver Thread? 5

Why? A wonderfully written 2nd book in a series. Normally, in my experience, 2nd books in a series take a nosedive and are not as good as the first. Not this one!! It has everything that the first book had and more.

Why: Sex, violence and a scene of drug use.

4 thoughts on “The Silver Thread (The Annika Brisby Series: Book 2) by Emigh Cannaday”