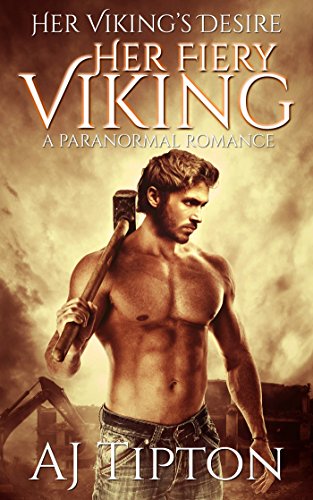 Where you can find Her Fiery Viking: Amazon

A thousand-year-old Viking with a curse. A feisty vixen with a fiery passion. What happens when they turn up the heat?

A thousand years ago, Mikkel and his family were cursed. The Viking has spent all that time with a temper that gets so hot, he literally bursts into flames… and he’s learned to cope with the tragedy of the results. Now he’s working as a demolition specialist by day and a playboy by night, never letting anyone get too close.

Joanna is a smart, sexy engineer who’s had it with all the sexual harassment she’s received on the job. When she practically explodes into Mikkel’s life, the heat they feel is undeniable. But just when things begin to sizzle between them, they’re faced with a challenge neither of them saw coming. Will their passion lead to blazing romance, or will they both go down in flames?

Her Fiery Viking is a short, hot paranormal romance novella. If you like smoldering love stories you can read in a day, then you’ll love AJ Tipton’s standalone installment from the Her Viking’s Desire series.

Mikkel is this super hot demolition expert who is over a thousand years old and has an awful anger management problem. He bursts into a fireball when he gets angry (which is quite often). The book starts with him banging a secretary in his boss’s office.

Joanna (also known as Jo) is a female engineer with a huge anger management problem. She has more of a hair-trigger temper than Mikkel. Put it this way, the first day on her new job, Joanna tasers someone and manages to alienate her new boss. I think she is my book soul mate.

For a short story, this book did pack a lot into it. The author wasted no time in having Joanna and Mikkel hook up. In the bathroom of their favorite bar after getting spent. After that, it was a fuckfest. But I did learn that Joanna developed anger management issues after her sister was murdered. Mikkel’s, well I am not going to go to much into that.

The ending was pretty good too-full of action, no sex, but action where there was fighting, etc.

As stated in the Goodreads blurb, the books in this series are stand-alone, so that you can start anywhere in the series

How many stars will I give Her Fiery Viking? 4

Why? A great short story with some pretty hot, explicit sex scenes

4 thoughts on “Her Fiery Viking (Her Viking’s Desire: Book 1) by A.J. Tipton”