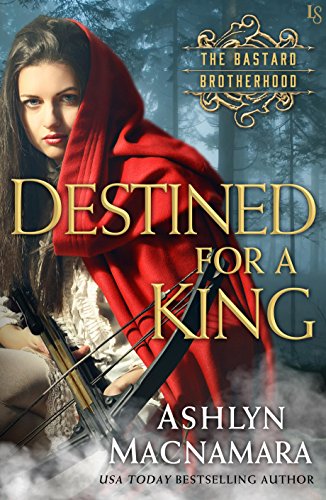 Bestselling author Ashlyn Macnamara, hailed by Jennifer McQuiston as “a born storyteller,” introduces the strapping, audacious outlaws of the Bastard Brotherhood in this enchanting tale of forbidden love between supposedly sworn enemies.

Though she is intended for the king, Calista Thorne picks up a crossbow to defend her ancestral home, Blackbriar Keep, from a gang of landless knights. She even manages to sink a poison-tipped arrow into their commander, who survives long enough to conquer the Keep and claim Calista for his own. Now, with her father’s life at stake, Calista must nurse the brigand back to health, and the strangest thing happens: She finds herself fascinated by his tautly muscled body, and enthralled by his hotly whispered demands.

Ever since his father’s death, the fearsome warrior they call Torch has been consumed by his quest for revenge. Taking Blackbriar Keep is the first step in that plan, and—by the three gods—it won’t be the last. But after taking one look into Calista’s smoldering gray eyes, Torch discovers a passion nobler than retribution. He will fulfill his destiny and take her from the usurper king, even in his weakened state. For with Calista’s love, no man has ever felt more powerful.

I was excited about this book when I saw the synopsis. “Oh wow, Jolie, it’s a Middle Age romance and it is going to ROCK“, I thought to myself.

Talk about setting myself up for a huge disappointment.

Destined for a King did have a great start. The book starts when Blackbriar Keep is overtaken by Torch and his knights. Calista, Lord Thorne’s daughter and only child, manages to shoot Torch in his leg with an arrow and wounds him.  After announcing to the keep (and her parents) that he is going to marry her, Torch passes out. Turns out that the arrow was tipped with kingsbane and poisoned him. Torch’s second in command orders Calista to heal Torch. He threatens her with this: If Torch doesn’t live, neither will she or her parents. Oh yeah, I forgot to mention Calista is promised to the King, Magnus Vandal. Also Torch is claiming that he is the long-lost heir to the throne, Josse Vandal.

Got that. Good. Because after all that is revealed, the book gets confusing.

I didn’t like Calista at all. She was headstrong and prone to doing things that got herself and other people in trouble. Like sneaking out of the keep to go see her old tutor, Brother Tanctrid. She asked him about what happened with the King and Torch. I still don’t understand how she did it, with the keep being as defended as it was.

Then there is Calista’s mother. She drove me nuts. Always reminding her that she was “destined for a king” but never saying why. What got me was when she told Calista “remember why I named you” and then NEVER WENT INTO THE REASON!!!! WTH. Why did she name Calista her name? WHY? Inquiring minds want to know over here.

Calista gets attacked by Brother Tanctrid after she wakes him from his trance. I thought he was going to end up being a vampire with all the talk about blood. It isn’t blood that he wants. Calista is effected by his attack but not in the way that you would think.

There is Instalove too. Calista goes from hating Torch to being in love with him within 4 days. Excuse me while I gag. I hate Instalove. At least give it a week or so to develop. The sex scenes were great and delicious.

The ending was good too and it left the book open for other books in the series.

Why? While very vividly written and there were some great characters, I couldn’t get past the Instalove and some very poorly written scenes. I actually had to reread chapters because I felt that I missed something when it was the author who didn’t include it in the book. I do feel that this series does have promise, though, and will be on the lookout for the next book.

Will I reread it? I will have to if I am going to read the other books.

Will I recommend to family and friends? I am kinda up in the air on this. I want to say yes but at the same time, I want to say no.

Why? Sex. Lots and lots of sex. Also some violence but nothing really graphic.