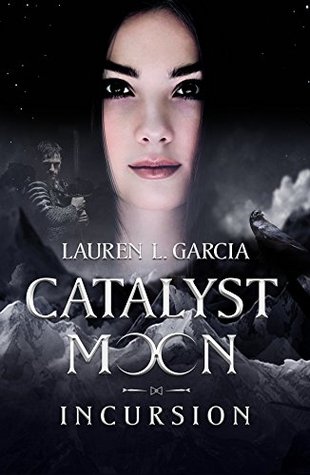 Kali, a crippled mage who longs to run from the painful memories of her deceased father, travels to Whitewater City to meet with a powerful healer. When her sentinel escort is decimated by monstrous bandits, she is left in the company of a single sentinel, Stonewall, a man with nothing left but his chosen name and his faith in the gods. Together, they must survive demonic creatures, bloodthirsty nomads, and a strange magic never seen before.

But trouble brews in Whitewater City. Sentinel Commander Talon struggles to keep the mages captive as Eris, a shape-changing mage, prepares for an escape of her own. Meanwhile, Milo, a new sentinel, must decide if the path he’s chosen is the right one after tragedy strikes his squad.

Catalyst Moon: Incursion is the first book an epic fantasy series, with notes of romance that introduces an old world where magic is new...and rebellion is on the horizon.

This book was interesting for me to read. This was  a society who feared mages and ket them sequestered from the other people. I was fascinated by it.

The story was great. A mage is getting transferred from old bastillion to a new one and her envoy gets attacked. Desperate to protect herself and the sentinels, she does magic through her bonds. She ends up transporting them far away from the scene of the battle.

If the author continued writing the story from Kalinda’s perspective, it would have been boring. Adding Gideon/Eris story would have completed the story. But when I got into Milo/Flint’s issues then it became confusing and dragged the story down.

I liked Kali and Stonewall’s characters. I liked that the author did a slow burn for the romance instead of Instalove. I didn’t feel them as a couple, at all. Because the romance was later on in the book and she was taken away from him before they could bump uglies. I’m not too sure if they did have sex. The scene where they were in the inn and making out didn’t say if they did or not. I went with no but I could be wrong. It was vaguely written.

The book ended like I thought it would. There was no huge twist and I saw what happened from a mile away. With the way the book ended, there was no doubt that there is a 2nd book coming.

Why? A wonderfully written story that was a quick read. A little predictable at times and a little vague (see above) at times. But definitely keeps you focused on the book.

Age range: Teens on up

Why? Violence and maybe sex that was very vague.