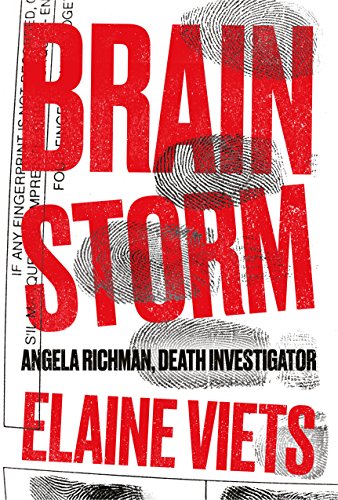 The ultrawealthy families of Chouteau Forest may look down on a woman like death investigator Angela Richman, but they also rely on her. When a horrific car crash kills a Forest teenager, Angela is among the first on the scene. Her investigation is hardly underway, however, when she suffers a series of crippling strokes. Misdiagnosed by the resident neurologist, Dr. Gravois, and mended by gauche yet brilliant neurosurgeon Dr. Jeb Travis Tritt, Angela faces a harrowing recovery.

It’s a drug-addled, hallucinating Angela who learns that Dr. Gravois has been murdered…and the chief suspect is the surgeon who saved her life. Angela doesn’t believe it, but can she trust her instincts? Her brain trauma brings doubts that she’ll ever recover her investigative skills. But she’s determined to save Dr. Tritt from a death-row sentence—even if her progress is thwarted at every turn by a powerful and insular community poised to protect its own.

I have never been disappointed in a book before I started reading Brain Storm. I had such high hopes for it by the Goodreads descriptions and then all the 4 and 5-star reviews. I was like “Yes, this is going to be awesome to read” and it was for the first few chapters.

I enjoyed reading about Angela’s job, the community where she lived and her friends. The author did a great job setting up her backstory. Then the misdiagnosis and stroke happened and this is where the book took a nosedive. We got to read all about Angela’s recovery and her hallucinations. Which in itself wasn’t a bad thing but there was so much going on in the backstory!!!

Like the Angel of Death working at the hospital, the little boy dying because Dr. Gravois testified before the insurance company that he didn’t need treatment and the romance between Monty and Kate. The focus, instead,  was on Dr. Tritt and the accusations that he killed Dr. Gravois. Which was silly.

The ending was anticlimactic and I didn’t have that “Aha” moment when the bad guy was caught. Because said bad guy didn’t show up until 3 chapters before the end.

How many stars will I give Brain Storm? 2

Why? While vividly written with characters that came to life, the plot fell short. There were so many red herrings that when the bad guy showed up, at the end of the book with very minimal foreshadowing, it confused me.

Will I reread? No

Age Range: Teen on up

Why: Minimal violence, no sex and some pretty gruesome descriptions of a car accident.