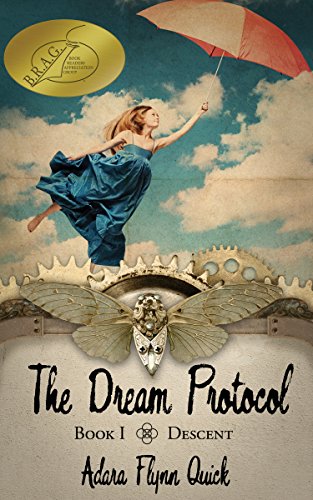 WHATEVER YOU DO, DON’T GET OLD.

In fiery young Deirdre Callaghan’s home of Skellig City, no one has dreamt their own dream in over a thousand years. Dreams are produced by the Dream Makers and sold by the Ministry, the tyrannical rulers of the city. In Skellig City, years of life are awarded equally and the ruined are cast away beneath the city on their 35th birthday.

Unbeknownst to the Ministry, Deirdre’s handsome friend Flynn Brennan is afflicted with a terrible disease – a disease that accelerates the aging process. Knowing his fate if the Ministry should ever discover his illness, Flynn has lived his whole life hiding from their watchful eyes. When Flynn’s secret is finally discovered, Deirdre is determined to free him from the Ministry’s grasp. But to save him, she will have to reveal herself to a shadowy enemy…one that none of them even knew existed.

This was an interesting book. A society of people lives in an underground city called Skellig City. These people have never dreamed their own dreams. They pay for dreams that are made by the Dream Makers. These dreams are sold by the Ministry, the ruling government of Skellig City.

The book starts when Deirdre Callaghan is late to the attendance of her friend’s Descent. In this society, you are considered ruined at 35. Then you are sent through a tube to Tir Na nOg, their version of an afterlife. Her mother is due to have her Descent next week and Deirdre is sick at the thought of her mother leaving her.

While that is going on, Deirdre is fighting to keep Flynn from being discovered by the Ministry. Flynn has an aging disease that makes him seem much older than his 15 years. Because of this, he has been in hiding from the Ministry and their Drones.

One day, Flynn is found out, captured and Deirdre is forced to take action to help him. The series of events that happens afterward blows Deirdre’s mind.

It was interesting that the author chose 35 as the age for being ruined. Not interesting bad but interesting good, if that makes sense. The comments about the ruined are very interesting too. “They are a drain on our society” was one quote that stood out in my mind.

The wannabe romance between Flynn and Deirdre was cute. The touches and glances were enough to convey how they felt about each other. It made me go “Awww” and get a sappy grin on my face.

I liked that the author included the roots of Skellig City. It was interesting to read and I do hope that she continues it in the 2nd book.

The ending was a bit of a cliffhanger but I figured that much when I saw the “#1” after the series name. The cliffhanger wasn’t that bad but it did make me go “Grrrr” when it ended.

How many stars will I give The Dream Protocol? 4

Why? Very well written YA dystopian book. It was a very fast pace and the plot was not complicated at all. Would be a perfect beach/pool book.

Why? Very clean (no sex or bad language) with very minimal violence.