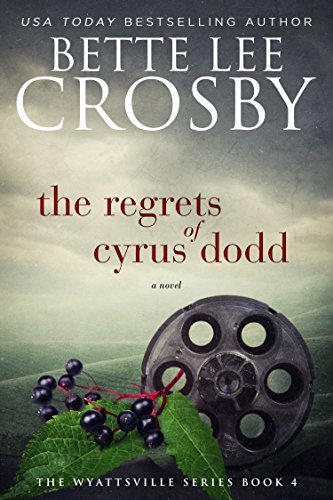 Where the book can be found: Amazon | Barnes and Noble

The Regrets of Cyrus Dodd – Book 4

“Regret is what stands in the way of happiness,” she said then turned and walked away…

From award-winning USA TODAY Bestselling Author BETTE LEE CROSBY, comes an early twentieth century family saga of two Southern men who come up against one another. Both are prideful, iron-willed and stubborn. One will lose his farm, the other will lose his family. In a tale that delves into the heart of a small town West Virginia community two men discover that being right is not the same as being happy.

Believing he has lost everything, Cyrus Dodd has no choice but to start over. He and wife Ruth leave their farm and travel to Wyattsville. As they settle down to a life far different than what he’d planned, Cyrus is forced to deal with one challenge after another, and the regrets trail behind him like a row of ducklings.

He told Ruth they were leaving trouble behind and swore this time it would be better; but now he’s wondering if that’s a promise he can keep.

This book is a great book about what happens after you’re hit with blow after blow in life and you don’t give up. It had a positive message woven throughout it. It shows what happens when you have everything but you lose the most important thing, family.

This is was an easy read and would be perfect for the beach or pool. You can put it down and not lose your page or your way with the plot. After a tense couple of first chapters, the book evens out and is smooth sailing to the end.

I didn’t like the chapters that were started Cyrus’s musing or Ruth or even Bethany’s. It struck me as odd and didn’t need to be there. I got enough from the actual story than to read that. That took away from the story.

This is a book 4 in a series but it can be read as a standalone book. No reference to previous books at all. If this didn’t have a #4 after it, I wouldn’t have known it was part of the series.

How many stars will I give The Regrets of Cyrus Dodd? 3

Why? While a beautifully written historical fiction book, it didn’t keep my attention. The lack of detail to some characters (mainly Jeremy and what happened to him after he killed Cooper) led me to almost put the book down and not finish it. But, after those chapters (like I stated above), the story panned out and became a wonderful story.

Will I reread it? Maybe

Will I recommend to family and friends? Yes. Like I said, this would make a great pool or beach book.

Why? Marital rape, spousal abuse, child abuse, and a murder. Nothing that went into great detail.

One thought on “The Regrets of Cyrus Dodd (The Wyattsville Series: Book 4) by Bette Lee Crosby”