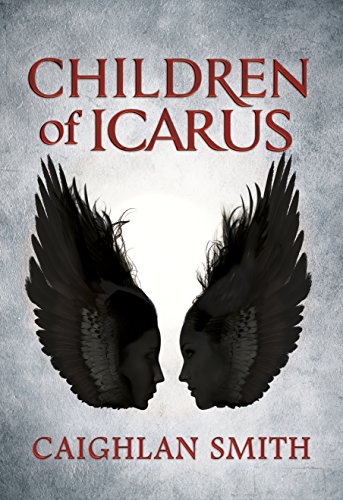 It’s Clara who’s desperate to enter the labyrinth and it’s Clara who’s bright, strong, and fearless enough to take on any challenge. It’s no surprise when she’s chosen. But so is the girl who has always lived in her shadow. Together they enter. Within minutes, they are torn apart forever. Now the girl who has never left the city walls must fight to survive in a living nightmare, where one false turn with who to trust means a certain dead end.

This is one of the best YA books that I have read in a while. I read it in one sitting. I was engrossed by the story.

In this story, a whole society has formed around that Greek myth. The society never go outside but instead live within many skyscrapers. Once a year, 6-7 children, ages 10-16, are chosen to go run the Labyrinth and to go find the Angels.

The main character of the story is Nameless and she is a bit of a wuss. She lives in her best friend’s, Clara, shadow. When she is picked to go into the Labyrinth along with Clara, she is excited and afraid. Clara is everything she isn’t. Beautiful, creative, brave…

Once they get into the Labyrinth, everything changes for the worse. What happens in the Labyrinth is awful and these children,  they are an annual sacrifice. A lucky few are rescued by a group of children who have survived in the Labyrinth.

I am not going to go into the book other than to say from the moment that Nameless enters The Fates to the ending was unbelievable. I ran the full gauntlet of emotions. From happy to sad to upset to disbelief.

How many stars will I give Children of Icarus? 5

Why? Like I said above, this is one of the best YA dystopian books that I have read in a while. The storyline is amazing, the writing is vivid and the characters jump off the pages into your brain and stay there.

Age Range: Teen on up

Why? Lots of graphic violence and one scene of attempted rape

2 thoughts on “Children of Icarus by Caighlan Smith”