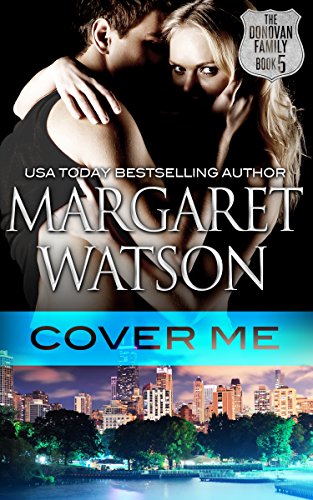 Love Me – The Donovan Family, Book 1

Watch Me – The Donovan Family, Book 2

Find Me – The Donovan Family, Book 3

Trust Me – The Donovan Family, Book 4

Cover Me – The Donovan Family, Book 5

Protect Me – The Donovan Family, Book 6

Save Me – The Donovan Family, Book 7

See Me – The Donovan Family, Book 8

Chicago cop Brendan Donovan loves the adrenaline rush of his role on a tactical team. So when he’s assigned to an undercover job to ferret out the supplier of a new and deadly sex drug, he’s thrilled. His partner is Cilla Marini, a detective he’d met recently during a traffic stop. He’s intrigued by Cilla, but his sister told him that Cilla doesn’t date cops. Which is exactly what they have to pretend to do. Brendan loves a challenge.

Cilla is shocked to find out that Brendan is her mystery partner. After an incident that forced her to transfer from her district and isolated her from her fellow cops, Cilla knows relationships with cops are off the table. But she’s spent far too much time thinking about Brendan since he pulled her over for speeding. Now, not only are they working together, they have to pose as a couple to find the source of the sex drug that’s already killed several men.

As the action heats up, Cilla and Brendan don’t have to pretend they want each other. But when secrets put them both in danger, will they have each other’s back? Or will their quarry divide and conquer them before they can find their way to happily ever after?

I was surprised by this book. As you all know from previous book reviews, I don’t like reading books out-of-order in a series. They are hard to read because there are references to the other books that have come before in the series.

But not this book. You can read Cover Me as a standalone book. There are references to the other books but (and stress but) they are for the story only. Which is another reason why I liked this book.

I first met Brendan Donovan as he is sitting outside a drug house, doing surveillance. When a vintage Mustang goes speeding past him, he assumes that it was stolen. So he gives chase and pulls the car over. Imagine his surprise when not only does he pull over a woman but she is a cop and a hostage negotiator on her way to a scene. Her name, Priscilla (aka Cilla) Martini. A cop that is shunned because of an incident that happened in her old district with another cop.

Brendan and Cilla do meet again. This time they are partners and they are looking for the dealer(s) of a deadly street drug that has killed 5 people. This drug is used as a sexual stimulant like Viagra. Cilla is going undercover at the pub where the drug seems to be dealt at. Brendan is going as a pub regular who starts to have a relationship with Cilla after meeting her there. Cilla got a heads up about a serial rapist that is striking the local clubs/pubs in the area and to keep her eyes open.

The sexual attraction and the heat between Brendan and Cilla were unfreakinbelievable. The fact that Cilla could get aroused from a look from Brendan and Brendan from Cilla was awesome. When they finally do have sex, it rocketed off the page.

What I loved about this book was that the sexual tension was second fiddle to the story. The author used the sex scenes as delicious interludes to Brendan and Cilla’s police work. This is how a romance is supposed to be. The storyline and then sex. Not sex and then storyline!!!

I did get frustrated with Cilla and her not wanting to have a relationship with a cop. Which was based on her aunt’s experiences. Her aunt’s experience was bad. But it is something that shouldn’t have been reiterated to a child over and over and over again. I didn’t like that Cilla was the fixer for her family. Every time someone had a problem, they called her. Her mother acted like a small child when Cilla kept telling her to go see her Uncle Donny to get her brakes fixed. Made me want to reach through the book and smack both Cilla and her mother.

I did figure out who the serial rapist was early on in the book. No fault of the author but the fake name (and Cilla’s reaction to it) was a dead giveaway. I liked that it leads into another storyline and that one was left open-ended at the end of the book.

I didn’t understand why ratting out a fellow cop for doing something bad was such a bad thing. The way Cilla handled herself when meeting Ward was very classy and NOT the way I would have handled myself. Also, Brendan and Connor’s defense of her was great too.

The ending was great and I was taken by surprise at who the dealer was. I didn’t think it was who I thought it was.

Oh and I want to say, I love Australian shepherds. Hehe.

How many stars will I give Cover Me? 4

Why? This is a well-written romance with a big heap of mystery/suspense in it. There were a few parts that did frustrate me (see above) but overall, I loved it. And as the 5th book in a series, this is definitely a standalone book.

Why? Lots of hot, steamy sex. Drug use. Violence and one scene of attempted rape.

2 thoughts on “Cover Me (The Donovan Family: Book 5) by Margaret Watson”