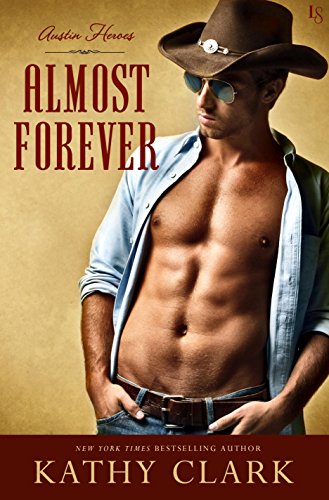 Where to find this book: Amazon | Barnes and Nobles

A cold case leads to blazing-hot temptation in this novel of romantic suspense from bestselling author Kathy Clark. For readers of Nora Roberts and Karen Robards, Almost Forever pairs a rugged lawman with a woman who may just be a murderer.

Justin Archer is a Texas Ranger through and through, a loyal man devoted to the dangerous job he loves. But when the grisly discovery of a skeleton in a local vineyard turns an old missing-persons case into a vicious homicide, Justin finds that the toughest challenge of his professional career will be keeping his hands off his chief suspect: the dead man’s beautiful, young trophy wife. Did Lori Roberts kill for vast material gain? The only thing Justin knows for sure is that their chemistry is instantaneous—and overpowering.

Lori worked hard to build a new life for herself and her daughter. She turned her husband’s struggling vineyard into a thriving enterprise, and now she stands to lose it all over something that happened eight years ago. Justin could lock her up and throw away the key, but Lori desperately wants to trust him. More than that, she wants to let him into her wounded heart. Because Lori’s been running from the past for a long time . . . and she’s ready to start living for the future.

I almost didn’t finish this book. Why? Because I couldn’t get over the characters. This book had a ton of promise. The storyline was great!!! A man thought to have been a missing person ends up being found dead on the vineyard he owned, 8 years later. The widow is under suspicion but the Ranger assigned to her case knows that there is more to meet the eye. The author could have gone in so many directions with this awesome plot. Instead, she tried to turn it into a love story and did succeed for the most part.

I loved Justin and Lori’s characters but I didn’t love them together at first. There was too much baggage on Lori’s end. She tried to deny her attraction to Justin but couldn’t. And ended up having sex in her dead husband’s study while her daughter is in the next room. Nope. Nope. Nope. Too much ewwww factor that. They got more believable once Lori’s life was endangered and Justin was forced into a vacation.

I did guess who Mark’s killer was by the middle of the book. But it still didn’t take away from the emotional scene when the killer was revealed. I guessed who was after Lori shortly after her incidents started happening. So the mystery wasn’t there for me.

I almost didn’t finish the book and was going to put it away when the scenes with Grammy started. Grammy was pure gold and the scenes with her and her grandsons were 100% awesome. The skunk scene with Harley, Mackenzie and the twins was awesome and turned me back into the book.

The ending was a little too pat for me. Everything was wrapped up with a bow and delivered to the reader.

Also, this is the 2nd book in a series and we all know how much I love those. But this was pretty much a standalone book with references to Nick and Jamie from the first book.

How many stars will I give Almost Forever? 3

Why? The book was a dull read with lackluster sex scenes. The characters didn’t have chemistry between them until halfway through the book. I almost DNF’d it but the scenes with Grammy pulled me back in and made me finish the book…hoping she would make more of an appearance.

Will I reread it? Maybe

Why? Sex and violence.