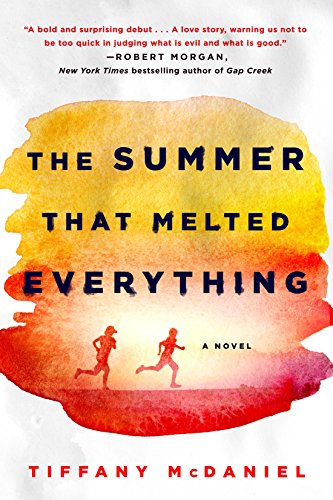 Fielding Bliss has never forgotten the summer of 1984: the year a heat wave scorched Breathed, Ohio. The year he became friends with the devil.

Sal seems to appear out of nowhere – a bruised and tattered thirteen-year-old boy claiming to be the devil himself answering an invitation. Fielding Bliss, the son of a local prosecutor, brings him home where he’s welcomed into the Bliss family, assuming he’s a runaway from a nearby farm town.

When word spreads that the devil has come to Breathed, not everyone is happy to welcome this self-proclaimed fallen angel. Murmurs follow him and tensions rise, along with the temperatures as an unbearable heat wave rolls into town right along with him. As strange accidents start to occur, riled by the feverish heat, some in the town start to believe that Sal is exactly who he claims to be. While the Bliss family wrestles with their own personal demons, a fanatic drives the town to the brink of a catastrophe that will change this sleepy Ohio backwater forever.

I don’t even know what to write here (which is a first) because the book was THAT good. It was written in such a way that you couldn’t help but get sucked into it and then you can’t put it down. Like I said, it is THAT good.

I was introduced to the Bliss family in the first chapter of the book. Autopsy, Stella, Grand, Fielding and Aunt Fedelia. Autopsy is the local prosecutor for the town of Breathed. Autopsy decided, one day, to write a letter to the devil inviting him to Breathed and posted it in the paper. Guess, what, a young boy claiming to be the devil showed up right before a major heat wave.

This is where the story became interesting. The author kept you guessing if Sal (Satan and Lucifer’s name combined) was the devil. He had insight about the different relationships that were going on in the town that no 13 year old should know. I never figured out if he was the devil or not.

Strange events started happening every time Sal went into town. The heat kept rising, a woman has a tragic accident, a mob is incited, stuff along those lines. To keep him safe, he isn’t allowed out of the yard/house.

The story is told in flashbacks from a 70 something-year-old Fielding. Who suffers survivor’s guilt. I don’t like it when books are told in flashbacks. You lose something from it. In this case, it worked. I got to see the long-term damage that was caused by the events of that awful summer/fall and it is heartbreaking. The author did a perfect job of taking older Fielding’s memories and turning them into the story about younger Fielding.

There was a huge twist in the story that I saw coming. It involved Elohim, the midget and Fielding’s former mentor and Sal’s biggest enemy in town. I did a WTF when it was revealed.

How many stars will I give The Summer That Melted Everything? 5

Why? This was a very well written book that will keep you glued to it until the very end. It will make you question things, make you laugh and make you cry.

Will I reread it? yes

Why? Some strong language and violence