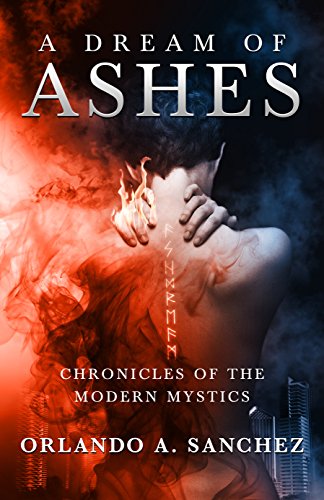 Series: Chronicles of the Modern Mystics

Ava James is a fire mystic with the Mystic Investigative Division. As a branch of the Enclave, a worldwide mystic organization, the MID is feared, respected and reviled.
When the half-charred body of a Mystic is found, the Enclave sends her to investigate the strange death. Ava finds that all the clues point to the killer being a fire mystic, one of her own. Accused by the Enclave of working with the killer she must solve the case before a secret buried in her past is revealed and destroys her world.
Can she save herself? Will she find the murderer?
If you like hardcore, fast-moving action, complex mystical powers and an unstoppable heroine, then you’ll love Orlando A. Sanchez’ thrilling new series: Chronicles of the Modern Mystics.

Buy A Dream of Ashes and join Ava on her adventure today!

This is the first book I have ever read by Orlando Sanchez and I have got to say, it was GOOD.

From the beginning, when I first met Ava kicking some bad guys ass, the action is non stop. I told BK that not only would this make a great fantasy movie BUT it would make a great action film. Of course, he didn’t understand but still.

The story was good too. Ava is a fire mystic who is working for the MID (Mystic Investigative Division). She is sent to a crime scene where a fire mystic is burned up and fingers start pointing towards her. When the head of the MID is injured in a blast at a bar, she is considered the main suspect and the chase is on. What a chase it is. Ava is chased all over NYC until she finds temporary asylum with her Sensei. Then she learns some startling facts about her uncle and herself.

The book picks up when she heads to Japan to help her uncle Seb, a Void mystic. The action gets better.

The ending was a bit of a cliffhanger (thanks to Seb’s revelation). We all know how I hate cliffhangers but this actually worked for this book. I can’t wait to read book 2 and see if it is as action-packed as book 1.

Why? It was a very fast paced read (I read it in one sitting) that had a ton of action in it.

Why? No sex scenes but tons of very descriptive violence.