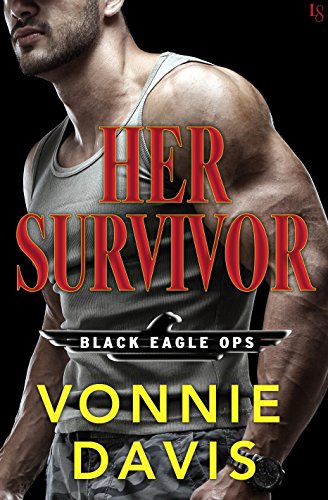 Navy SEAL Dustin Frank can handle physical pain; it’s his soul that needs mending. After losing part of his leg in an explosion, the panic triggered by his PTSD nearly drives him over the edge. So Dustin retreats to the Eagle Ridge Ranch, a charming hideaway tucked into the Hill Country of Texas. There he finds solace in the arms of a shy beauty who reawakens desires he thought he’d lost forever—and who makes him want to lose control, just when he needs it most.

Kelcee Todd sees beyond Dustin’s scars to the real man beneath: fiercely protective, strong yet tender. She wants nothing more than to feel his battle-hardened hands on her body. However, Kelcee is not the ordinary small-town girl she appears to be. Her brother is a killer with ties to the Russian mob, and after her testimony put him in prison, he’s out and eager for revenge. Now Dustin is her best defense, even if it could cost him everything. Kelcee could never ask him to make that sacrifice . . . but she can’t stop him, either.

I am guilty of stereotyping a book and I am sorry. When I first started reading this book, I thought to myself “Wounded Army vet meets spunky girl and sparks fly. Yawn.” And I am here to say,”I am wrong” and “Not even close“.

Dustin’s character was well written and his PTSD symptoms were point on. There were points in the book where I wanted to cry for him. I understand how his mental fog, anxiety, and depression were affecting his everyday life. I really do. So when ZQ offered him a place at the ranch, I wanted to cheer.

When I couldn’t get any more vested in the book, we meet Kelcee and the rest of the town. Talk about a town that I would love to live in!!! What eccentric people. I loved it. From ZQ’s mom to Sugar Loaf/Silver Stud, they definitely stick in your mind. I also could see Kelcee being one of my good friends. She was so real and I giggled at some of her zingers and one-liners.

The sexual tension and sexual chemistry between Kelcee and Dustin were off the wall. From the minute they met the tension was there, even though they were both not wanting it. And when they finally ended up in bed, it was so bittersweet that I wanted to cry.

The subplot about Kelcee being in the Witness Protection Program was kept under wrap. Translated: I didn’t pay attention to the blurb (was too busy staring at the cover and drooling). When it was revealed, it was surprising to me. The only thing that I didn’t like about this was the Kelcee took forever in telling Dustin. Which in my mind was stupid because he could have ended that whole thing for her when she got hurt.

The ending was hilarious, in a way. Not giving anything away but when Junebug freaks out, I laughed until I had tears running down my cheeks. It was that funny.

3 Things I liked about Her Survivor:

3 Things I disliked about Her Survivor:

How many stars will I give Her Survivor: 3.5

Why? One word: Instalove. Other than that, this was a well-written romance with some raw and gritty sex scenes in it and some very memorable characters.

Will, I reread it? Yes

Why? Some pretty descriptive sex scenes and some violence.

Is it part of a series? Yes, it is Book 1 of the Black Eagle Ops series.

One thought on “Her Survivor (A Black Eagle Ops Novel: Book 1) by Vonnie Davis”