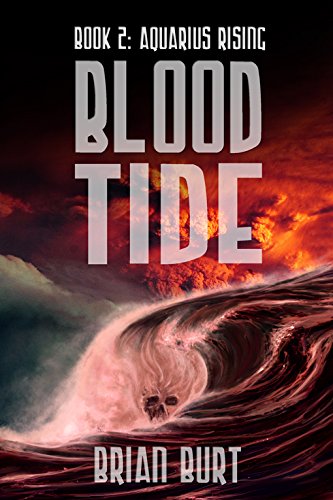 Megalops is an Aquarian, a human-dolphin hybrid who lives in one of the many reef-cities that thrive beneath the waves on an Earth ravaged by climate change. Some of the Humans who cling to the barren lands blame Aquarius for their plight and unleashed the Medusa Plague that entombed Megalops’s wife and daughter in stone. Tormented by that loss, Megalops dedicates everything to avenging his murdered family, no matter what the cost. He unleashes a Vendetta Virus as cruel and lethal as the Medusa Plague, a bio-weapon that transforms living Humans into Aquarian corpses.  Ocypode — one of the heroes who stopped the Medusa Plague — and his band of Human and Aquarian allies battle desperate odds to prevent Megalops from committing an act of genocide that will escalate into global conflict, dragging the Earth’s other humanoid species into the chaos. War demands sacrifice. If Mother Earth and Mother Ocean wage war against each other, will anyone survive?

My review:
This book is definitely not a standalone book. To understand what is going on you need to read the first book. While the author does explain in the 2nd book, it is not as detailed as the first one. I will include the link to the 1st book at the end of my review.
Now saying that I loved this book. Megalops does the unthinkable and the way it was written was so believable (of a dystopian/sci-fi book). Could you live with being the only member of your family alive plus being a survivor of a genocide without having some mental issues? I mean, he had to look up at his wife and daughter frozen on the Juno water tower. That’s enough to drive anyone insane.
But it doesn’t excuse what happens next and to be honest, that scene was gross. I get that it was a reverse birth and him doing that was crucial to the plot but still.
I loved that more time was given to Ocypode and Sapiens. I really liked their characters. I liked that Ocypode was instrumental in helping the Aquarian species.
There were a couple of twists in the book. One huge and the other not so huge. I called the not so huge one about halfway through the book. The huge one, though, did take me aback some and it did set up the 3rd book perfectly.
How many stars will I give Blood Tide? 3
Why? While it was a great 2nd book, I felt that more should have been explained about the Redeemers (mainly the ones that were pacifist and not wanting to kill everything), the other colonies AND the other humanoid lifeforms that were met by Ocypode. The ending also seemed a little forced, like the author had to make a deadline.
Will I recommend it to family and friends? Yes but with a warning to read the 1st book before reading this one
Will, I reread it? Yes
Age range? Adult on up. There are scenes of extreme violence and one suicide.
Where can I find this book? Amazon
Other books in series:  Aquarius Rising