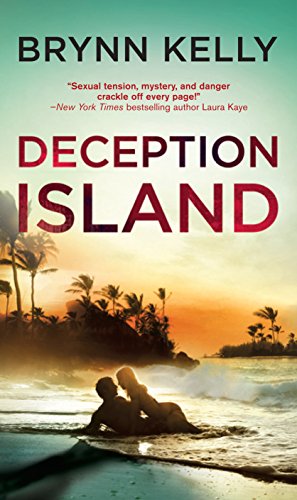 Rafe Angelito thought he was done with the demons from his past—until his son is kidnapped. Blackmailed into abducting an American heiress, the French Foreign Legionnaire soon finds himself trapped in paradise with a woman who’s nothing he expects…and
everything he desires. But when he uncovers her own dark secret, Rafe realizes he’s made a critical mistake—one that could cost him everything.

Playing body double for a spoiled socialite was supposed to be Holly Ryan’s ticket to freedom. But when she’s snatched off her yacht by a tall, dark and dangerous stranger, the not-quite-reformed con artist will make a desperate play to turn her captor from enemy to ally, by any means necessary.

Yet as scorching days melt into sultry nights, Holly is drawn to the mysterious capitaine, with his unexpected sense of honor and his searing touch. When they’re double-crossed, they’ll have to risk trusting each other in ways they never imagined…because in this deadly game of deception, it’s their lives—and hearts—on the line.

Oh my Lord, was this book good!!! Everything about it was gold. From Rafe’s background as a child soldier to Holly’s prison incarceration to the circumstances leading up to Rafe kidnapping Holly, it kept me reading until the book was finished. I finished this book in one sitting.

When I read a Harlequin book, I expect a “wham, bam, thank you ma’am“. I expect a novel with a hero who thinks he is a god, a heroine who can’t see beyond herself, lukewarm sex scenes and an insipid plot. Not with this book. The twists and turns of the plot, not knowing where it will take you, was fantastic. The sex scenes were HOT, HOT, HOT and did not take away from the plot at all.

As for the story, it sucks you in. For those of you who are parents, you know you would do ANYTHING to get your child back. Which is what Rafe does after finding out that his son is kidnapped by a person out of his past. The more you learn about Rafe and his past, the more your heart bleeds for him.

Holly’s story is as tragic but they don’t get into it until they are on the island. The only thing we know about her is that she is an ex-con. Who was approached by an US senator to impersonate his daughter on a sailing trip around the world. What the author reveals along the way explains why Holly is the way she is and again, it is heartbreaking.

I do like that the author chose child soldiers and human sex trafficking as subplots for the books. Both are heartbreaking and both need to be stopped. Look for links at the end of the review to see what you can do to help end both.

There is a huge twist at the end that took me by surprise. Like majorly huge and the author did a great job at not even dropping a freaking hint about it!!! Put it this way, I put the book down and said “Whoa” after the twist was revealed. That’s how big it was.

The ending was perfect. To be honest, if it ended any other way, I would have been disappointed.

How many stars will I give Deception Island? 5

Why? This book sucks you in from the first page and doesn’t let you go. You can’t help but get emotionally entangled in the characters lives. It is beautifully written and doesn’t skimp on the terrors that Rafe and Holly had to had to endure in their past and present. Plus the love story was really good too…lol.

Would I reread it? Yes

Would I recommend it to family and friends? Yes

Age Range? Adult only. Like I said above, the sex scenes are intense. Also, there are scenes of rape and extreme violence.

Where to find the book: Amazon