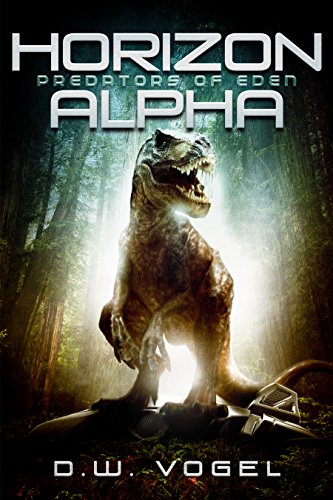 We never would have come here if we’d known.

Two hundred years ago, the great Ark Horizon Alpha escaped a doomed Earth and went searching for a new home. The passengers landed on Teu Ceti e expecting paradise, but instead they discovered a planet stuck in its own version of the cretaceous period. The humans’ one defense against the dinosaurs ravaging the planet is an electric fence, built from the remains of the shuttles that brought them there.

But Eden base has only days of power left.

With most of the adult men dead, rookie soldier Caleb Wilde and his unit of teenage boys leave the electric fences of Eden in search of a reactor core lost deep in the jungle.

The last remnant of the human race waits behind the electric fence for their return. The dinosaurs wait, too—for the electricity to die and the feast to begin.

This book was fantastic!!! I don’t like sci-fi with dinosaurs in the book. The one book that I read that used them as antagonists went WAY overboard. It killed my enthusiasm for reading any books of the same.

Well, I am happy to say that this book has righted the wrongs of the other book. From the beginning, when Caleb tells about what happened to Earth, the 2 centuries of traveling throughout space and the accident that fragmented the population of the spaceship on to the new planet (Teu Ceti) and the frightening discovery that the new settlers made, drew me right into the story.

The author makes you feel the excitement and dread of Caleb going on his first mission. Then the terror of the crash and the exhaustion of trekking cross-country to Eden base and losing unit members to the dinosaurs. I actually had nightmares about the descriptions of the T Rex and the other dinosaurs.

I will say that I loved the 2 twists in the story. One, I should have seen coming from a mile away, I am good at guessing things like that, but I didn’t. The other one, near the end of the book, well, to be honest, it made me want to cry. Very poignant.

How many stars will I give Horizon Alpha: Predators of Eden? 5

Why? It was a very well written, descriptive, nail-biting sci-fi space opera book that kept you glued to it for the entire book. And it makes you want more!!!!

Age range? Teens on up. It is a very clean book (no sex….actually nothing to that effect at all) but a ton of violence and death by a dinosaur. Some of the death scenes are very descriptive.