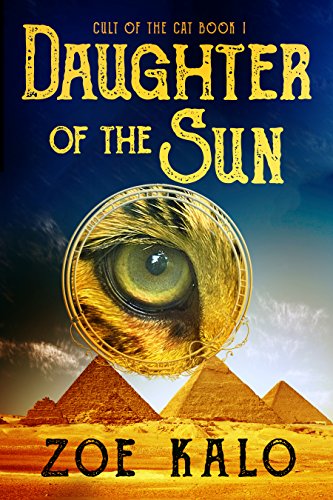 Series: Cult of the Cat

In the Island of Cats, Trinity must solve the mystery of the torn papyrus and uncover the prophesy that points to her new feline abilities in order to stop the evil serpent Apophis from taking over the world.

Sixteen-year-old Trinity was born during a solar eclipse and left at the doorsteps of a convent along with a torn piece of papyrus covered with ancient symbols. Raised by nuns in the English countryside, she leads a quiet life until she’s whisked away to the Island of Cats and a grandmother she never knew.

But before they can get to know each other, her grandmother dies. All that Trinity has left is a mysterious eye-shaped ring. And a thousand grieving cats. As Trinity tries to solve the enigma of the torn papyrus, she discovers a world of bloody sacrifices and evil curses, and a prophecy that points to her and her new feline abilities.

Unwilling to believe that any of the Egyptian gods could still be alive, Trinity turns to eighteen-year-old Seth and is instantly pulled into a vortex of sensations that forces her to confront her true self—and a horrifying destiny.

This was a different book but I enjoyed reading. I don’t know if I have mentioned it before, but I enjoy reading YA books. I have read some good books from that genre. Anyways, back to the subject.

This is a different book. Egyptian mythology is used in the book. Which is great.The author did a fantastic job explaining the different gods/goddesses. I can count on one hand how many books I liked that used Egyptian mythology as a major plot line and this book is one of them.

Of course, being the first book of a series, it left more questions than answers. I didn’t like that the grandmother dies after Trinity arrives on the island. It left so many unanswered questions and I will admit, I got frustrated.

The book did lag a little for a couple of chapters but then picked up the pace for the explosive ending. There are hints in the book about who the villain was but I picked it up early and to be honest, wasn’t very surprising. Still, the ending was a shock.

How many stars will I give Daughter of the Sun? 5

Will I read it again? Yes and I really want to read the other books in the series too

Will I recommend it to family and friends? Yes.