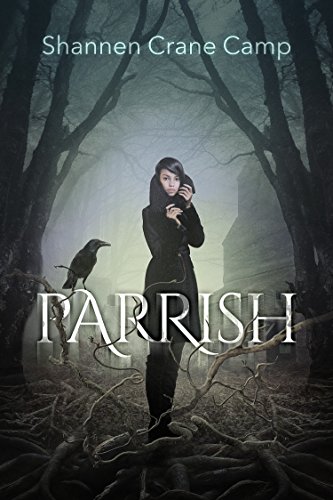 Sadie Smith was absolutely certain of three things: (1) ghosts were indisputably real; (2) she and her three friends were some of the best (though not the most successful) ghost hunters in Oregon; (3) her teammate Jefferson Parrish was always the scariest thing in the room. In a face-off between supernatural beings and Jefferson’s Tim Burton-esque vibe there really was no contest.

But ghosts—unsurprisingly—can’t help pay the rent. So when Sadie and her friends are offered an undisclosed sum of money from an anonymous client to find a link between four historical haunted locations, it’s an easy sell.

During their cross-country investigation, Sadie finds herself forgetting about Jefferson’s macabre tendencies and falling for his sweetness, even if his idea of a love letter reads more like a note from a serial killer. And she can’t stop thinking about his annoyingly irresistible deep green eyes.

As Sadie’s feelings get more tangled up with Jefferson, their group puts together the final pieces of a 100 year old mystery—one that will change Sadie’s life forever.

Ever read a book and get goosebumps while reading it?

I loved Sadie, Jefferson, Deacon and Brighton’s character. They were all written in such a way that you couldn’t help but like them and hate their character flaws.

The romance between Sadie and Jefferson was scary and sweet at the same time. Scary because Jefferson is intense and very weird. Sweet because it was written as being one of those “I couldn’t help but fall in love with him” romances. I have a mental image of Jefferson with huge alien-like eyes from the author’s description. She described him as having “big owl eyes” and my imagination kinda took off with it.

The plot was great too. I loved that Sadie, Jefferson, Deacon, and Brighton are paranormal investigators. That is something that I have always wanted to do but have been too chicken. The excitement of them hitting paranormal hotspots, and having a cross-country trip at the same time leapt off the pages.

The ending was perfect and it had a huge twist that was hinted at when the foursome was in Boston. I didn’t see it coming and it threw me for a loop. I actually put the book down and stared into space trying to process it for a minute, it was that much of a shock.

How many stars will I give it? 5

Will, I read it again? Yes, and I hope to read the next book. I am hooked on the characters. I need to see what happens to Sadie, Jefferson, Deacon, and Brighton.

Will I recommend it to family and friends? Yes. This would be a great book for those who are just starting to read the fantasy/paranormal/romance genre.

Age range: Teen on up.