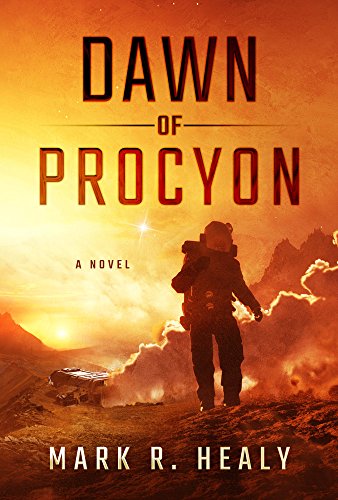 A distant planet. A deadly secret.

Seventeen years after it began, the interstellar war has taken its toll: the inhabitants of Earth are desperate to find a way to defeat the Argoni, a merciless and horrifying alien race.

Light years away from the fighting, mechanic Landry Stanton lives a peaceful, mundane life on the desolate planet Procyon One, and that’s just the way he likes it. But when an unauthorized trip to the other side of the planet leaves him shipwrecked and stranded alongside a hostile alien that wants him dead, Landry discovers a terrifying secret: the Argoni threat is greater than anyone back on Earth imagined.

With his oxygen and water running out, and with no way to warn the United Earth Marines, Landry’s lonely fight for survival becomes a battle for humanity itself.

What would you do if you were stranded on a distant planet, running out of air and water and you are being followed/watched by an alien?

Would you be able to survive? Or would you give up?

I enjoyed reading this book. It kept me on the edge of my seat the entire time I was reading it. I didn’t think that Landry would make it during some points in the story. It was definitely a nail biter!!!

The two subplots were compelling too and the author did a wonderful job of tying them all together at the end.

I didn’t like that it ended in a cliffhanger. I hate them with a passion. But the cliffhanger did get me wondering what is going to happen in the next book (if there is going to be a next book). And that means I that need to read it to find out. Sigh.

Would I recommend this book to family and friends? Yes

Age range: Teen on up.