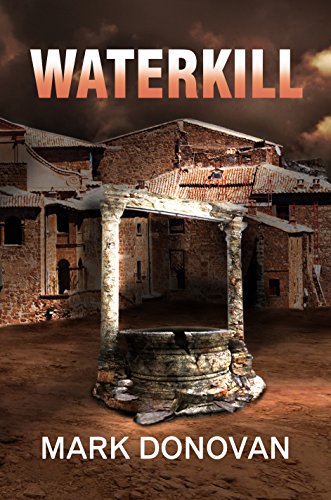 Where you can find Waterkill: Amazon

A Yemenis man tragically loses his family, a plane disappears into the Alaskan bush carrying a secret, and thousands suddenly die in a German town. Dave Henson is tapped by the U.S. government to help solve the related mysteries, but finds himself drawn in deeper when his wife goes missing.

With the mysterious outbreak of a deadly disease in a Yemeni village, followed by an increase in terrorist chatter after the crash of a small airplane in eastern Alaska, CEO Dr. Dave Henson and colleague Ron Blackwell of NSurv Inc. are tapped by the Department of Homeland Security to locate the aircraft wreckage and its suspected deadly contents.

While Henson and Blackwell are in the eastern mountains of Alaska helping the U.S. Border Patrol locate the missing aircraft and its contents, Dave’s wife, internationally known journalist Dana Cogswell, goes missing while covering another sudden and suspicious epidemic in a small town in Germany.

Dave races from Alaska to Germany to rescue Dana and ends up on a quest to the Middle East to find her. Along the way he learns of a shocking betrayal of friendship and that the path to Dana ultimately leads to the terrorist leader behind the deadly outbreaks.

Waterkill was a fantastic book to read. It draws you in from the first chapter and keeps you turning those pages to find out what exactly is going to happen. I read this book in 2 nights, going to bed early one night to read it.

I liked that there was a ton of action. The author was straightforward with who the terrorists were and who the good guys were. I also liked the science angle of it too. Nanoscience fascinates me too.

This book scared me on so many levels too. Because it makes you think and wonder “Are the terrorists doing this same thing?” and “If so, will our country be able to stop it like in the book.”

I did like the unexpected curve that the author threw into the mix. Again, it made me think “What if.”

Will, I reread this book? Yes

Will, I recommend it to family and friends? Yes

The age range for this book? 18 plus and only because of the violence in it.