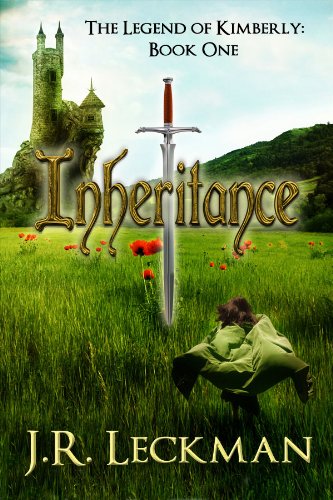 Where you can find The Legend of Kimberly: Inheritance: Amazon

Kimberly is at a loss when her grandfather passes away unexpectedly. Left at the mercy of an abusive father, she is forced to watch as her grandfather’s legacy is demolished, piece by piece before her eyes.

The one thing her father cannot touch, however, are the stories of Auviarra, the magical world that made her grandfather’s books famous. When Kimberly discovers a magical blade that shouldn’t even exist, she is whisked away to a land of heroes and villains. Taken in by a band of misfits, she tries to measure up to the stories she loved so much.

However, something has followed her to Auviarra, a shadow from her grandfather’s past. In the process of hunting it down, she soon discovers that she’s inherited something other than a magical blade, something that will threaten to undo who she is.

I liked this book, but it was very dark. I know it geared towards young adults, but I would say that it should say towards young adults 16 and older. I say that because there are some pretty detailed scenes of child abuse. I also want to warn that those same scenes could be a trigger if you have PTSD or severe anxiety.

The book was well written, and even I missed Hal’s character. He stood up for what was right and the legacy he left her was unbelievable!!!

The world of Auviarra was great too. It came alive in my mind. Kim’s friends (Serra, Trey, Helena, and Ronnee) were diverse. I liked Serra because she connected the most with Kim.

The twists (and there were a couple of BIG ones) were that, twists. One, I didn’t even see coming, and I am good at figuring out stuff like that.

I will tell people to read this book, beware of triggers.