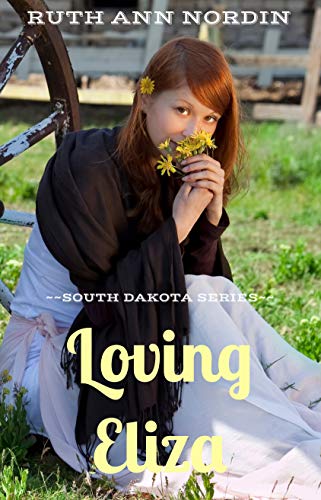 Where you can find Loving Eliza: Amazon

Eliza left her life of prostitution to become something she could never be back in Omaha: a lady. Her plan is to remain single for the rest of her life, but when she arrives in South Dakota, she runs into John Evans. And he’s not about to let her remain single if he has anything to do about it.

As soon as John sees Eliza, he falls in love with her. Not only is Eliza the most beautiful young lady he’s ever seen, but she isn’t put off by the fact that he’s mute. Since his mail-order bride didn’t come, then he sees no reason why he can’t marry Eliza and make a home with her.

Eliza, however, knows very well why they can’t be together. She used to be a prostitute. John is a sweet man who’s never even kissed a woman. He deserves a virgin who can give him her innocence and a future with children. Eliza can do neither one for him. But while she insists he waits to see if his mail-order bride is coming after all, she is taken in with his sweetness and charm until she’s torn between doing what is best for him and what her selfish heart wants.

When I selected this book and saw that the author was Ruth Ann Nordin, I was thrilled. I have read several of her books and loved them. This one didn’t disappoint.

I liked that Eliza had a past and that sexual abuse (by a relative and by childhood prostitution) was part of her past. I haven’t read too many historical novels where it is stated, no sly references, flat out said. Eliza was scarred, but you could see her healing as the story, and her romance with John progressed.

I also liked that the author made John fall in love at first sight. And that he had to chase her. The fact that John was mute was an interesting pick of the author. He had to choose to communicate with her in other ways, and he did an excellent  job of making his point.

John’s family was interesting. They supported and defended him. Except for Troy. He was a dick and let’s say that he got what was coming to him in the end.

I would tell people to read Loving Eliza if they like historical romances. There is a Book 2 and 3, but they can be read separately from Book 1.