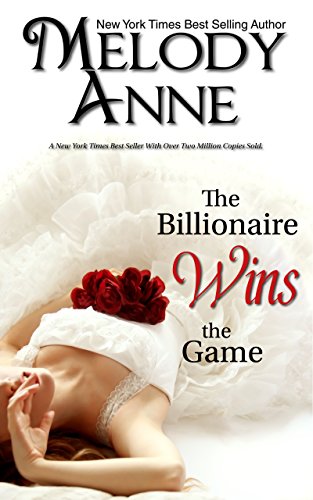 Where you can find The Billionaire Wins the Game: Amazon

Joseph Anderson has decided it’s time for his three successful sons to find brides. Joseph wants grandchildren to fill his mansion, and he wants them immediately. His eldest son, Lucas, is successful in all areas of his life, except love, and Joseph begins matchmaking. He finds Amy Harper and deems her the perfect daughter-in-law. He just needs to get her and Lucas to both realize they’re made for each other.

Lucas Anderson is wealthy, sexy, and stubborn. He has no desire to have any woman enter his life, causing chaos, or using his family’s name. Many women have tried, and he’s been successful in finding out who they are beneath their false smiles.

Amy Harper was raised in tragic circumstances and doesn’t like pampered, rich men who have been handed everything with a silver spoon. She spent years finishing her education and then received a job with the Anderson Corporation. She instantly doesn’t like her incredibly sexy boss, who is arrogant and thinks every woman should fall at his feet.

When Amy becomes pregnant after one reckless night of passion, she’s scared he’ll take the baby and run. Lucas is demanding and used to getting his way, but Amy has just the right amount of spark to ignite his fuse and challenges him each step of the way.

Lucas’s father, Joseph, and his brothers Alex and Mark offer laughter, love, and support. With the love of Lucas’s family, who aren’t only rich and successful, but also kind and giving, Amy starts to realize that being wealthy doesn’t make or break a man, and starts to picture the happily ever after she never believed in for herself.

What I liked about The Billionaire Wins the Game:

What I didn’t like about The Billionaire Wins the Game: