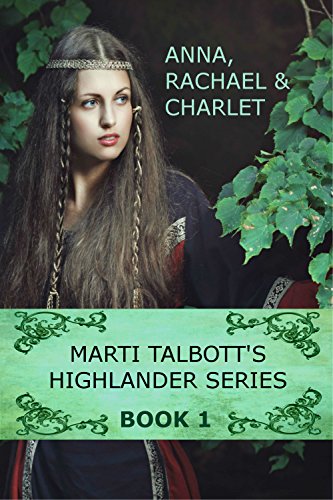 Where you can find Marti Talbott’s Highlander Series: Amazon

ANNA — In love with a woman he had only seen once and could not find, the Highlander, Kevin MacGreagor was growing older and needed a wife to give him sons. No other woman pleased him, not even the daughters of other lairds, so he finally settled for Anna sight unseen. But when his men went to meet her guard, she was all alone and badly beaten. Who could have done such a thing and why? RACHEL — had a dark secret and even she didn’t know what it was. She was seventeen, determined to become as good a warrior as any Highlander, and was firmly against taking a husband. Connor had other ideas. He loved Rachel and when a rival clan took her, he thought he would lose his mind. How would he ever get her back and if he did, would her dark secret separate them forever?CHARLET — The King of England asked the Highlander, Kevin MacGreagor, to hide a baby girl and save her life. But sixteen years later, someone discovered where she was. To Blair Cameron fell the duty of hiding and protecting Charlet. It was not an easy task. She was furious, head-strong and determined to run from him. Could Blair keep her alive? And if he did, could he keep himself from falling in love with her?

What I liked about Marti Talbott’s Highlander Series:

What I disliked about Marti Talbott’s Highlander Series: