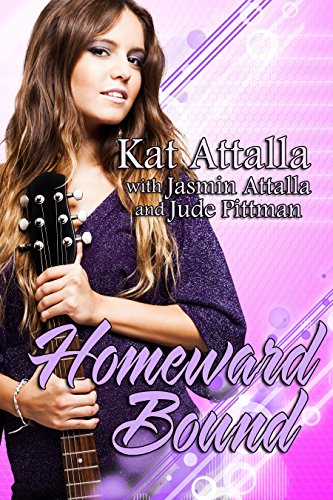 Where you can find Homeward Bound: Amazon

On stage, she is Leather, a Rock’n’Roll fantasy. Her music dominates the charts, while the “Queen of Flash” struts across the concert stages. She is a tease, a shameless flirt–and a glittering illusion. Kate Costello has had enough of the music scene. She takes off for New Mexico in search of the anonymity she’d bargained away for fame.

Jake Callahan is a single father. A decade ago his wife left the farm, leaving him to raise his daughter. He spent his savings bailing out his wild twin brother and is now facing cash-flow problems. Renting out the empty house on his property seems like an ideal solution until he sees the woman who answers the advertisement. Jake doesn’t want the reclusive millionaire renting the house on his farm. But he has a teenager to deal with and bills to pay.

And now–a sexy tenant he can’t seem to ignore.

Sparks fly between the cowboy and the rocker who believe they have nothing in common except a menagerie of good-hearted matchmakers determined to prove they’ll make beautiful music together.

Why is it the books I have been reading have the main male character being an asswipe? And why are the women OK with the men acting like they are 3?

That is what I don’t like about this book. Jake is an idiot and acts like one in almost every scene in the book. From his first meeting Kate to the big reveal, he acted like an idiot. The only scene I didn’t blame him for being a jerk was when Kate took Chloe out of school without telling him. As a parent, I can 110% understand what that would feel like.

I did feel bad for Kate. I do agree that she shouldn’t have held back who she was. But with the way he reacted, I can understand why she hide who she was. She should have been straightforward with Jake from the beginning. Of course, she didn’t know that she would end up banging her landlord either.

With those faults aside, it was a good read. Enough sex to keep your attention and enough drama to keep the pages turning. I would recommend this book as a pool/beach/lazy day read.

This is going on my “maybe read again” shelf because of the reasons listed above. I love the author but the hero in this book rubbed me the wrong way, and it colored my view of this book.