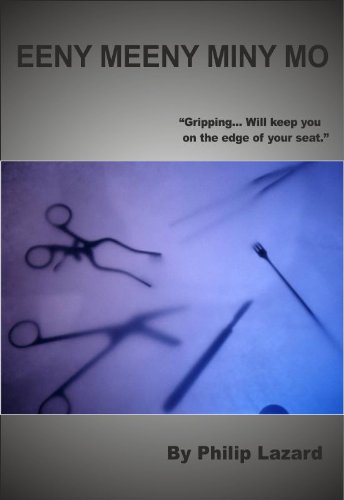 Where you can find Eeny Meeny Miny Mo: Amazon

“NYC police detective Harley Patterson has a special weapon. When she touches an object, she can read the thoughts of the last person who came into contact with it. One morning, a picture left inside her car shatters her existence. When she touches it, there is an image of a woman being brutally murdered, and on the back of the picture, a note: “Let the games begin.” A race against time is about to begin. Harley can see the future, but can she change it?”

I liked this book, a lot. When I could read, I was glued to my Kindle. The story sucked you in. From Harley’s not so great childhood to her outing as a psychic cop, she was a well-drawn character. She had her flaws like anyone else would and to me, that made her stand out to me.

The plot was a good one too.  A madman, with the same powers as Harley, running around NYC and killing people who are close to her. And she can’t see who he is.

Even the killer had my sympathy. His childhood was awful and when he got thrown into Juvie, it got worse. The scenes that were written broke my heart and gave a good insight into how a killer is made.

The author did an excellent job keeping who the killer was up until the last chapter. I even guessed wrong, and I am usually 99.9% right. The only thing that I didn’t like was the ending. It ended too abruptly for me.

This book will go on my read again shelf and if the author writes more books with this same character…I want to read them. I am also curious about what Harley’s real name is.