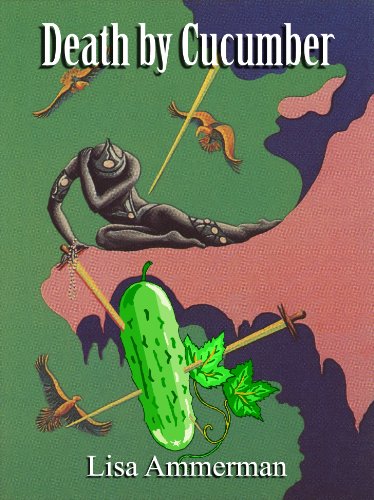 Where you can find Death by Cucumber: Amazon

Anna, a browbeaten housewife who never complains or dares question her loveless marriage, suddenly finds herself the victim of a brutal stabbing. As she recovers in the hospital, her controlling husband and a fatherly detective coax her to speak, but she refuses to say what happened. They’d never guess she’s facing her own inner truths instead, craving answers to questions she’s avoided thinking about for years.

Anna wants to understand her hidden wounds of guilt and regret; her motives in choosing to cling to a dull and sheltered life; her crime of marrying a man who gives her everything except what she really needs.

She might be incapacitated from her injuries, but she’s going to shock some people again. Maybe she’d already begun to rebel, just weeks before the stabbing, by befriending Bernie, a 53-year-old alcoholic neighbor with an odd hobby of growing cucumbers. Now Bernie’s a suspect in the stabbing–not surprising, given his crass, lecherous behavior.

But Anna isn’t going to admit to anything until she’s ready. She wonders why Bernie is lying to the police about his alibi. Then he impetuously visits her in the hospital—as if he’s reached his own breaking point. She’s astonished by what he says. Will it give her the courage to face her own cool-as-a-cucumber facade and tell the truth about what led to the crime?

This is a story about what can happen when we deny our emotions, and how heartaches can break and heal the most unlikely bonds between men and women.“

I made the mistake of judging this book by its cover, its title, and its synopsis. It’s funny how a poorly written summary left me with a preconceived idea of what a book will be like. And then my mind was blown because the book turned out not to be what I expected.

Which is what happened with this book. I started reading, expecting the main character to be killed by a cucumber. What I got instead was an insight into two different people’s lives and how their choices affect them down the road.

If I had a complaint about this book was that it got confusing sometimes. Mostly when switching back and forth between present and past. I also didn’t catch on that something else happened to Anna until about halfway through the book.

So, this will be going on my must read again shelf. I was surprised by the characters, and the author kept you guessing about who hurt Anna. I was fooled until the last couple of chapters. Also, the ending was a huge surprise. HUGE!!!

One thought on “Death by Cucumber by Lisa Ammerman”