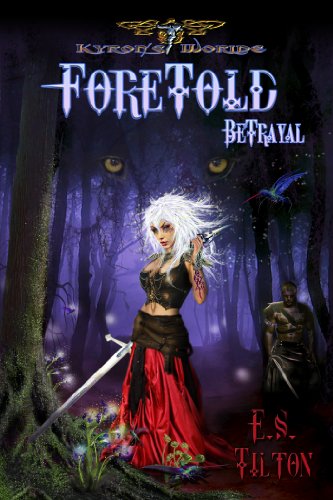 Where to find Foretold Betrayal: Amazon

In a shattered world of genetic manipulation and magical illusion the shape of an ear can mean death, and fear of discovery haunts even the most innocent of beings.

Tribal opponents from birth, two assassins are pitted against each other in a struggle for survival. Betrayed by their organization, they must work together or face annihilation at the hands of an ancient evil.

Sumptuous, lethal, and heir to a despicable destiny, Kyra struggles for self-control in a body genetically designed for promiscuity. Fortunately, that same body is capable of illusions that make for an exquisite assassin.

Tahrek lives a complex code of deception and truth. Crossing the fine line between honor and duty unravels his secrets. Now everything he values, his clan, his sanity, his very life, are at risk.

Shackled by a code of abstinence, the Seven masquerade in plain sight, unable to use their psychic abilities to change the future. Despite the dire consequences, they rush towards the Foretelling and a promise of unity too good to believe.

The last line in the Goodreads synopsis says it all, mature readers only. The sex scenes go into very graphic details. Very realistic. So if you get offended by stuff like this, don’t read the book.

Saying that this book was excellent!! The author has four prologues, and yes, you should read them. They explain a lot like the prophecy and the races. Also, the whole storyline rocked.

I liked Kyra’s character a lot. She took no crap from anyone. Tahrek’s character took me a little longer to get to like. There was something different (other than being an illegal half breed) about him. When it was revealed, it came as a big surprise to me.

So, to sum it up. Great book but don’t read if you are not into graphic sex scenes. The storyline was great and easy to get into. Going on my read again shelf!!

One thought on “Foretold Betrayal (Kyron’s Worlde) by E.S. Tilton”